Bank holiday Monday and we set off in perfect weather conditions, well not really enough wind to start with but we are confident that it will fill in by the end of the day, ever optimistic!!…

….and we were right, the wind did fill in and with a favourable tide too we made excellent progress under cruising chute alone all the way until we had to pass through the ‘Passage de la Teignouse’, a lighthouse in the Quiberon Bay when we snuffed the chute and continued with the lightweight genoa and therefore better visibility.  The tides run strongly here and so it is best to arrive at slack water or at least with the tide with you.  The passage is about a quarter of a nautical mile wide, deep and is well marked. 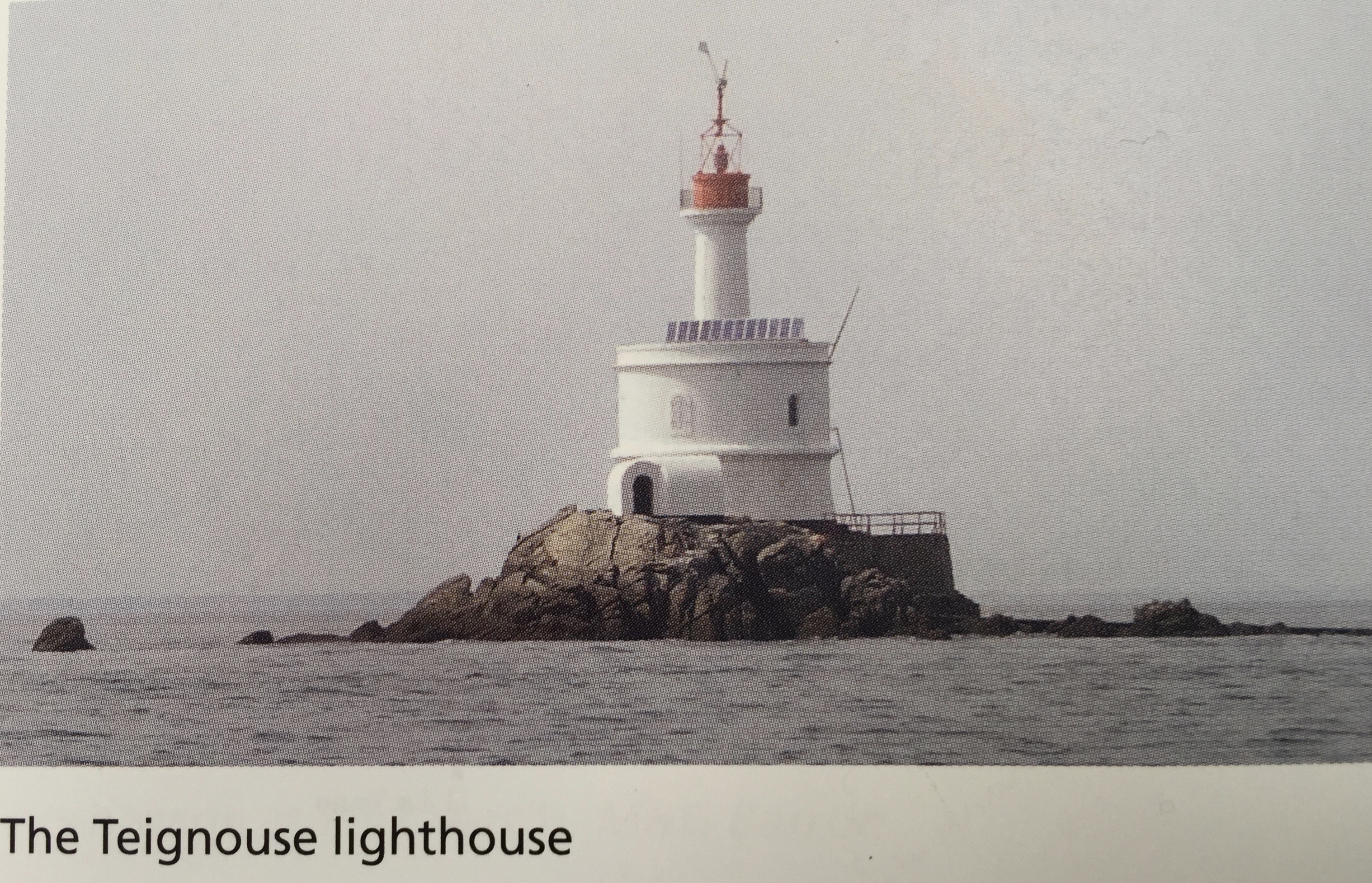 Here is a pilot book photo of the Teignouse Lighthouse showing it close up, it marks a very shallow patch in the Quiberon Bay and so we stayed well away from it, my photo is too distant!

La Trinité sur Mer is another picturesque port facing south on the Quiberon Bay. The marina is large and home to many of the famous french sailors and currently houses an enormous trimaran, Spindrift 2 skippered by Yann Guichard, which last November attempted to beat the 45 day record of circumnavigting the earth via the three capes set by Loick Peyron and therefore claiming the Jules Verne Trophy.  There is also the trimaran Idec Sports, skippered by Francis Joyon and others too.  Their mission failed this time, Sprindrift 2 returned in  47 days 10 hours and four hours later Idec Sports arrived. Incredible to think that they had raced all those thousands of miles through some of the most unforgiving seas and arrived back within four hours of each other!? I imagine they will be working hard on another attempt!

We found a berth alongside, helped by the marina staff who moved a boat for us so that we could get in!  The marina was very full, people making the most of the beautiful weather before the dreaded return to work/school! Couldn’t help feeling a smidgeon smug….! No sooner than we had secured our lines than another British boat came alongside to raft up with us.We always find this a good way to meet people and so were very happy to take their lines and help them moor alongside.

The owner and his crew of family members  were a very friendly bunch and had been here to La Trinité before.  They immediately wanted to book a restaurant for the evening and so they  dropped their dinghy in as we were so far away from the harbour ‘front’! They also very kindly offered to book a table for us as well while they were there.

We have tended to be a bit casual over the summer and so as we were told that the restaurant was rather smart I decided it was a chance to dress up a little!!

All ready to go and dine!

The following day we had a visit from our good friends Andy and Sarah Fitzgerald who had a day off from the dinghy racing (International 14’s) at Carnac, just along the coast.  Andy and Sarah came round in their rib and after we had had lunch on board we all got into the rib and had a tour of the river Crac’h estuary. Here we saw many of the characteristic oyster farming barges which go out on a regular basis, the region is renowned as the birthplace of the European flat oyster.

The Kérisper Bridge is a focal point on entering the river at La Trinité. It is a replacement for the original metal bridge which was designed by Eiffel. That bridge began life in 1901 but was destroyed in 1944.  The current bridge with it’s magestic arches, from which the carefree youth of today leap into the water at high tide, was inaugurated in 1956. We walked right out along the Vaneresse to and around Kerbihan Point which is at the entrance to the Crac’h estuary and the port.  At the end of the point is a very old stone house , ‘Ty Guard’ which was used as a shelter for the customs officers who policed the bay.  It is now privately owned and so not possible to get close but it is noted for being constructed entirely out of local stone, including the stepped roof.  The massive chimney served as a guard tower with access via an outside staircase. ‘Ty Guard’ – a shelter for the customs officers

We went further towards Carnac and came across the large south facing Kervillen beach which is very sheltered, gently sloping and the fine sand making it apparently one of the region’s most remarkable beaches with views south of Quiberon Bay. Our walk took us back through Le Poulbert pine wood, the narrow windy lanes with their dry-stone walls and into the town.

The town is centred around the church, St Joseph de la Trinité sur Mer whose tower had ten metres added to it back in 1891 so that it could serve as a landmark for sailors! It can still be seen as one approaches the port via the entrance channel.

Again we were sorry to have to leave this lovely port but we need to get back to Port la Forêt for Alan to return to the UK!  We thoroughly enjoyed our stay!

We had a great day on the water, the Bay of Biscay! There was not a breath of wind at first and in fact it was quite foggy and sunny at the same time? Very patchy but I was able to get this shot of an ‘albino’ rainbow! Quite spooky….?! We had to motor for four hours until finally we had some wind and then up went the cruising chute again and Musetta seemed to be enjoying the trip, as we were too especially when we were paid a visit by a pod of dolphins, about 40 – 50 of them!  It was magical as they cavorted about the boat diving uderneath and ‘blowing’ as they emerged the other side. They disappeared as they inevitably do BUT they reappeared twice more during our trip back!  Amazing, they make my heart sing!!